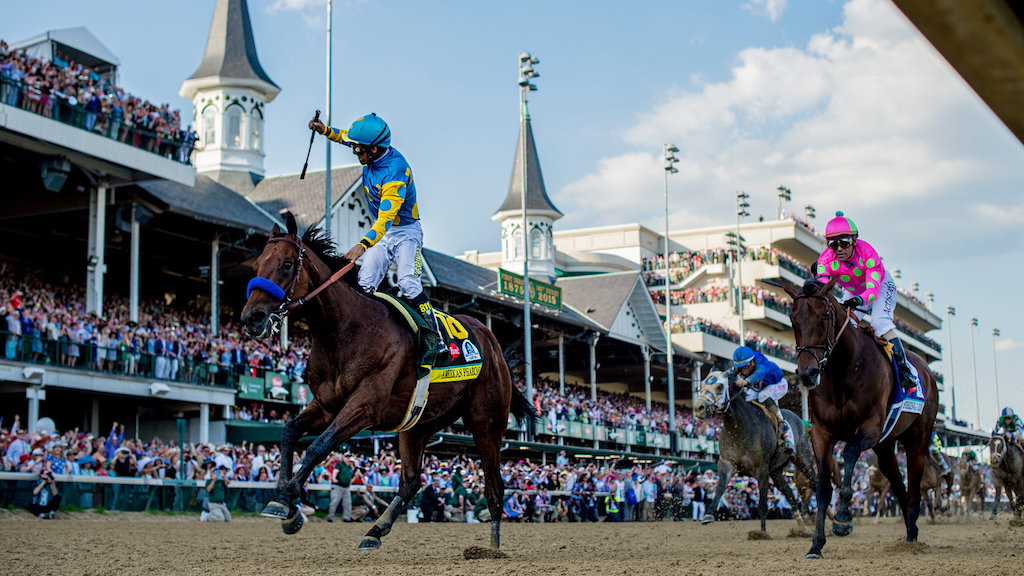 Horse racing’s 2021 Triple Crown is a three-race series for 3-year-old thoroughbreds. It consists of the Kentucky Derby, the Preakness Stakes and the Belmont Stakes. The 2020 races were all postponed due to COVID-19 concerns, and the order of the races was disrupted.

The 2021 version will be run in its traditional manner, with the Kentucky Derby leading on May 1. The 1 1/4-mile first jewel in the Triple Crown is run at Churchill Downs in Louisville, Ky. The 1 3/16-mile Preakness at Pimlico Race Course in Baltimore follows two weeks later.

SPORTS BETTING 101 > HOW TO BET ON HORSES

Finally, the Belmont Stakes will be run at Belmont Park in Elmont, NY, on June 5. It’s the longest of the three races at 1 1/2 miles and is farther than most 3-year-olds normally run. The distance poses quite a challenge for any horse that needs the Belmont to complete the Triple Crown.

The Kentucky Derby, the first jewel in horse racing’s 2021 Triple Crown, is just 10 weeks away. The qualifying period, the Road to the Kentucky Derby, awards points for top four finishes in 34 designated races. Anyone familiar with betting horse racing knows that only nominated 3-year-olds are eligible to receive points.

The Prep Series primarily awards points on a 10-4-2-1 scale for places first through fourth. Due to a weather-related postponement, it concludes on Feb. 27 with the Southwest Stakes. The race at Oaklawn Park in Hot Springs, Ark., was originally scheduled for Feb. 15.

The final 16 races comprise the Championship Series, which began with the Risen Star Stakes on Feb. 13. Six of the races carry points awarded on a 50-20-10-5, while seven carry 100-40-20-10. Since the inception of the current points qualifying system, no horse with at least 41 has failed to qualify.

The 50-point races conclude with the Rebel Stakes at Oaklawn on March 13. The 100-point contests begin the following week at the Louisiana Derby at the Fair Grounds in New Orleans. The last chance to earn points is at the Arkansas Derby at Oaklawn on April 10.

The only horse that has earned enough points to likely qualify for the Derby is Mandaloun. The Brad Cox-trained colt won the Risen Star and has accumulated 52 points. While it’s still early, Mandaloun has futures odds of 16/1 to win the Kentucky Derby. This is something to watch closely when betting the ponies in 2021.

Life is Good is the slim Derby Favorite at 7/1 odds as the Championship Series of races begin. He is trained by the legendary Bob Baffert and ridden by Hall of Fame jockey Mike Smith.

The pair teamed up to win the 2018 Triple Crown with Justify and are looking to repeat the feat. Life is Good is undefeated in two races, the last win coming at the Sham Stakes on Jan. 2.

He’ll next be in action at the San Felipe Stakes at Santa Anita on March 6.

If you are wondering how to pick an online racebook, we covered that in a great article. Take a look.

Behind Life is Good is Essential Quality, with three wins in as many starts and sitting second in points with 30. He’s also trained by Cox, and his jockey is Luis Saez, second in the standings at Gulfstream Park.

Essential Quality has odds of 8/1 and is scheduled to race next at the Southwest Stakes, a 10-4-2-1 race.

Greatest Honour has really come on in the last two races after two thirds and a second to start his career. In his last outing, he showed exceptional closing speed in winning the Holly Bull Stakes by almost six lengths.